Well, it’s actually been official for about two weeks now, I just waited a while before I started a blog about it. I have exactly seventeen days until I leave and it still feels surreal that it is actually happening.

For those that may not know, I will be an English teacher in Korea and I chose to apply to the EPIK program, which stands for English Program In Korea. With the EPIK program you are allowed to list a preference of where you want to live but there is no guarantee that you will be placed there. Especially if it is a popular destination.

The EPIK program decided to place me in rural Korea (in Jeonnam South Korea, otherwise known as the South Jeolla province or Jeollanam-do), which, if I’m being completely honest, I absolutely did not want a rural placement. Living out in the sticks for a year as possibly the only foreigner and most definitely the only person of color was not something that sounded very…fun. So once I found out where I’d be living, I immediately started doing some research but I didn’t get very far. Why? Because there is absolutely no information about South Jeolla! Either nothing happens there or people just don’t talk about the place…or both.

But yesterday I was finally able to find a blog of an English teacher currently living there. He only has a few posts up but reading them has been more than reassuring. South Jeolla is rural, yes, but it definitely seems like it’s my type of speed. I am not a city girl. I’ve never liked them, but I can survive in one. That’s the reason I chose Daejeon as my location preference. It’s a much smaller city with less people than Seoul but I’m certain it has everything I need as a foreigner with no car who needs to speak English from time to time.

As for South Jeolla, I don’t know what the place holds for me besides friendly elderly locals, lots of nature, and mild winters (Hallelujah! Lord knows I hate the cold). Jeonnam is one of the most least developed areas in South Korea so there is lots of land that has not been touched and turned into high rises and business centers. Hiking is a common activity that people choose to do there.

Although, I am not finding out much about Jeonnam, what I have discovered suits me just fine. Jeonnam seems to fit my personal vibes. I’m a very laid-back person. Definitely an introvert with the occasional extrovert tendencies. I love nature and enjoy hiking, and friendly locals make me happy. If I want some extra excitement, I can just take a weekend excursion to Busan, Daegu, or Daejeon. I am excited to see what else South Jeolla has to offer.

For anyone that is not familiar with South Jeolla, it is at the southern most tip of South Korea right before you cross the water into Jeju. 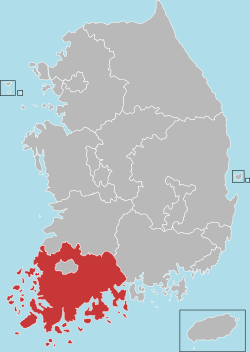 And get this! Jeollanam’s English language program is actually separate from the EPIK program. Well, sort of. They used to do their own recruiting and people could apply directly to the Jeollanamdo Language Program. I believe everything was done out of Gwangju (which is considered the “major” city of the south). They recently stopped that and decided to do everything through EPIK which encompasses South Korea as a whole. But once placed as a Jeollanam teacher, it kind of becomes a separate entity again. The orientation program for Jeonnam teachers is completely separate from the regular EPIK orientation.

EPIK brings the teachers in in waves. So it goes a little something like this:

I knew I would be out in the boonies when I read the email and noticed that we arrive almost an entire week earlier, at a completely different airport, and we don’t even get a team number. We’re just Jeonnam lol. But I’m actually not mad about it. Like I said, after doing as much research as I can, Jeonnam seems like it’s completely my speed.

Everything is all set now and the final countdown has begun. The only thing I am waiting on now is my visa. ^_^

I tend to go back and forth between feeling super excited and feeling like this is completely normal. There are mornings where I wake up with my heart beating fast and the first thing I want to do when I open my eyes is get online and watch videos about Korea. Then there are days where I am completely relaxed and my impending departure date seems like just another day.

I’m actually already packed and have been packed for about two weeks now (I packed on one of the days I was feeling excited). Now it’s just another waiting game. The countdown is here!

2 thoughts on “Going to Korea!”

I’m on the interwebs!